This module adds seamless Augmented Reality to your Qt/QML application.

The framework uses Random dot markers by Hideaki Uchiyama, which are chosen over other possibilities due to their small negative visual impact on the scene they are put on. 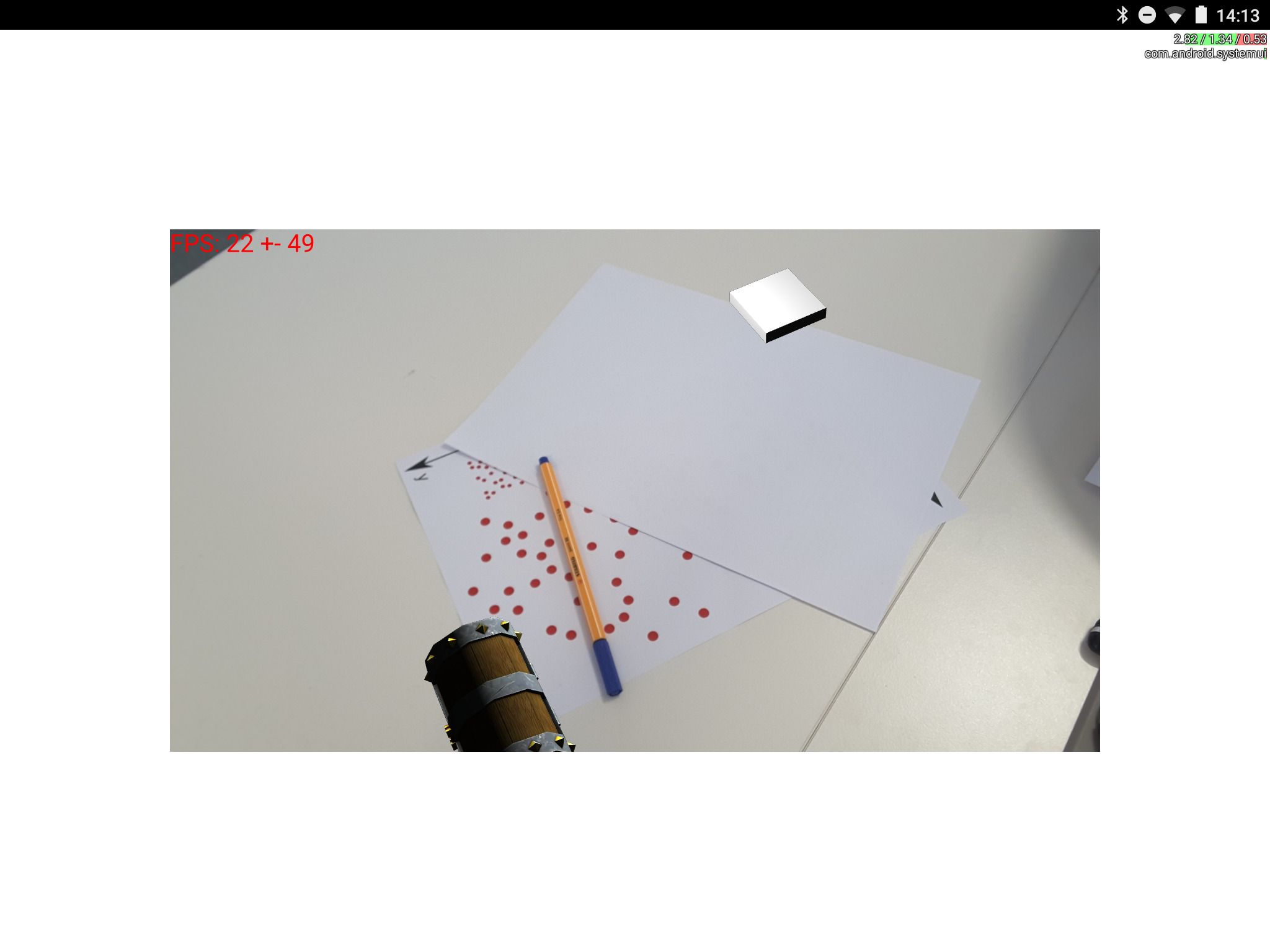 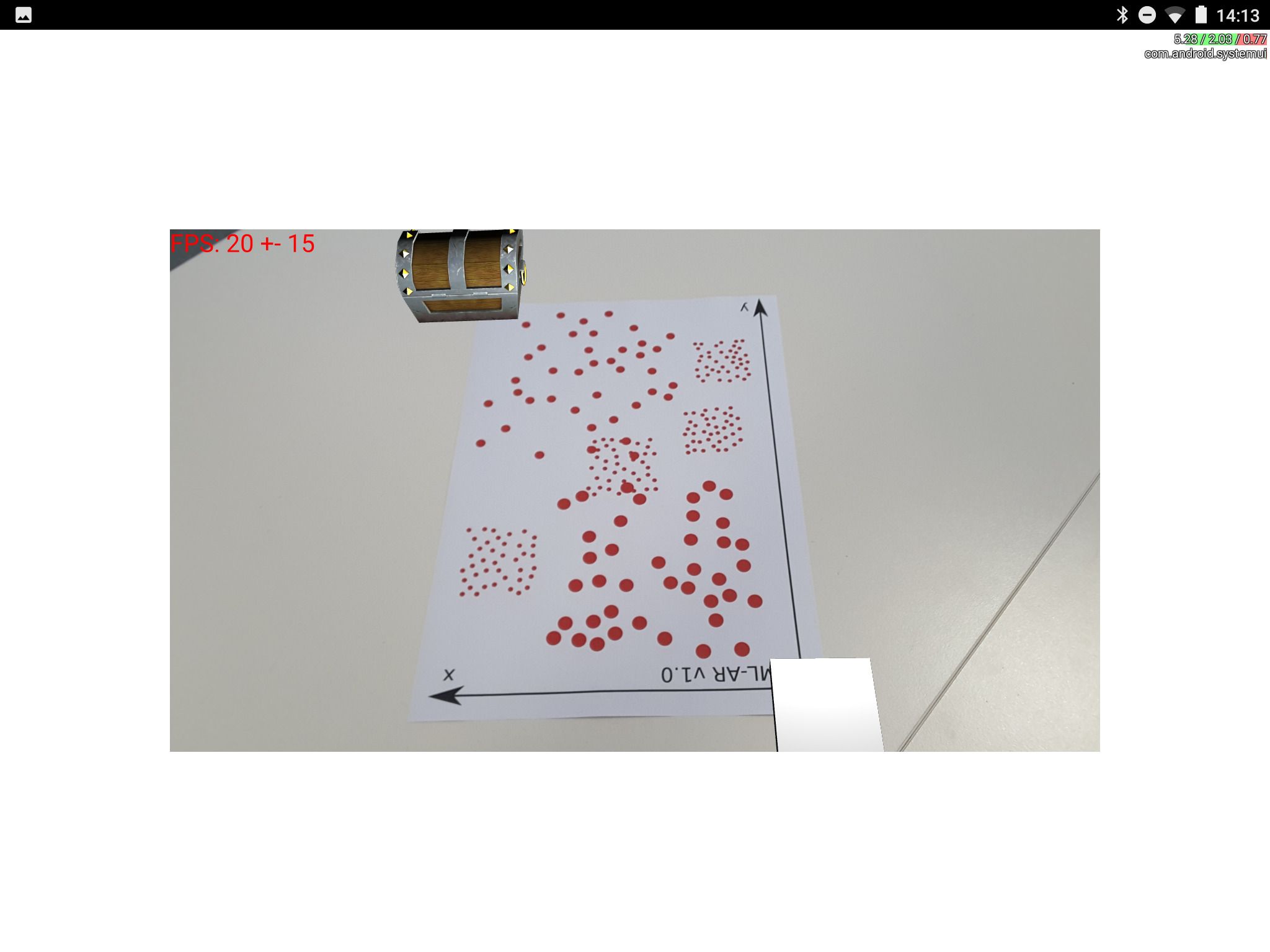 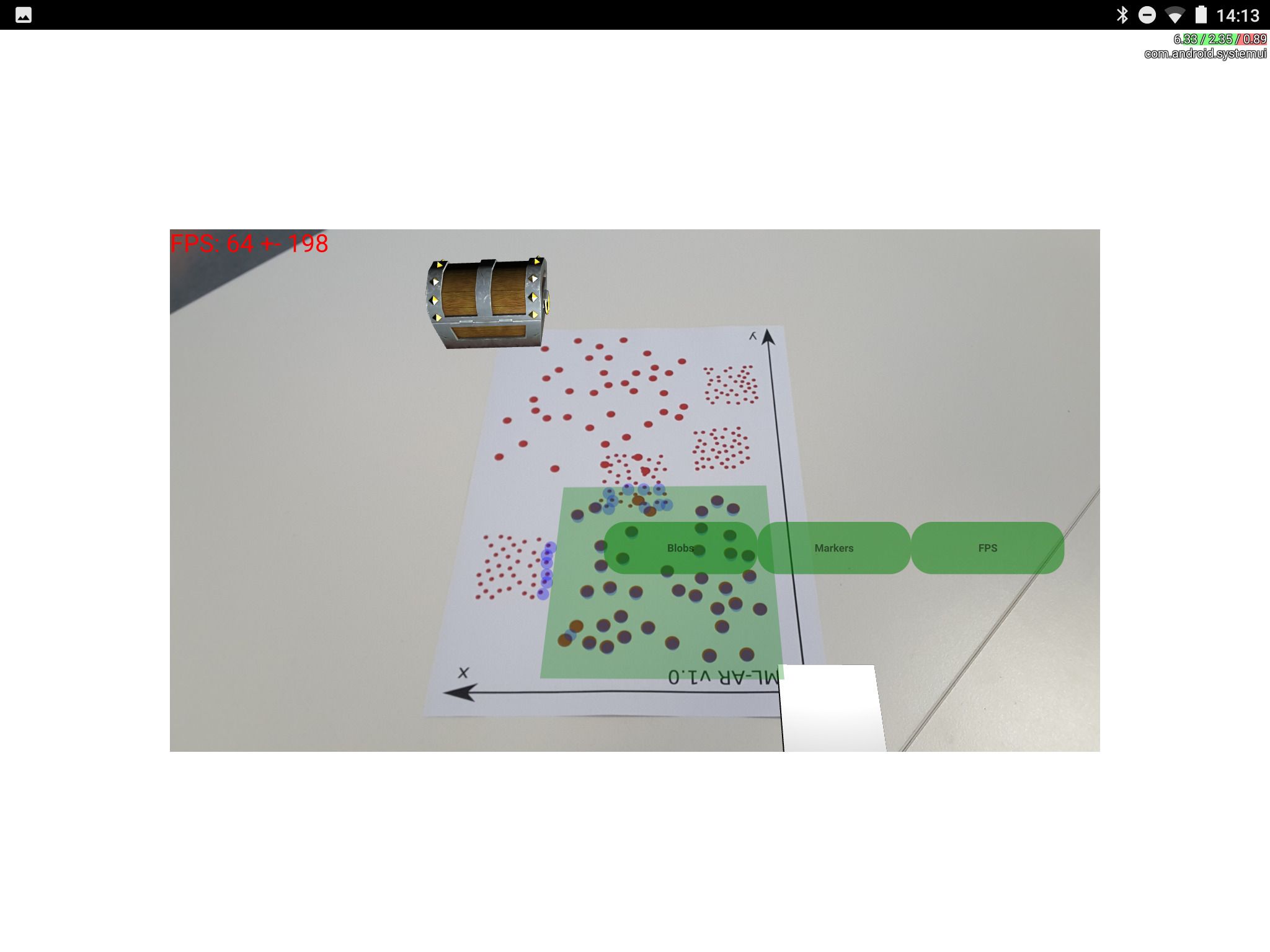 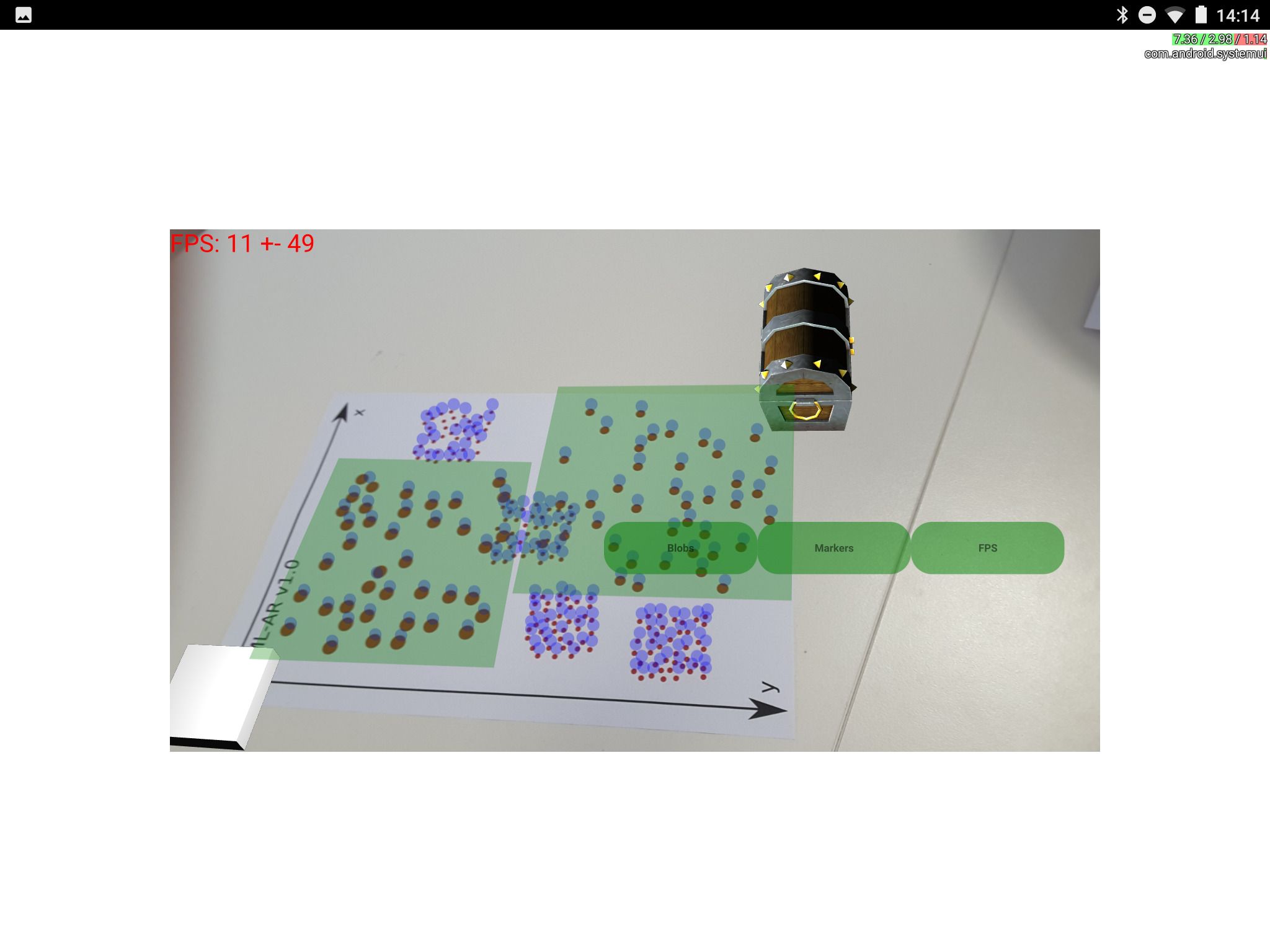 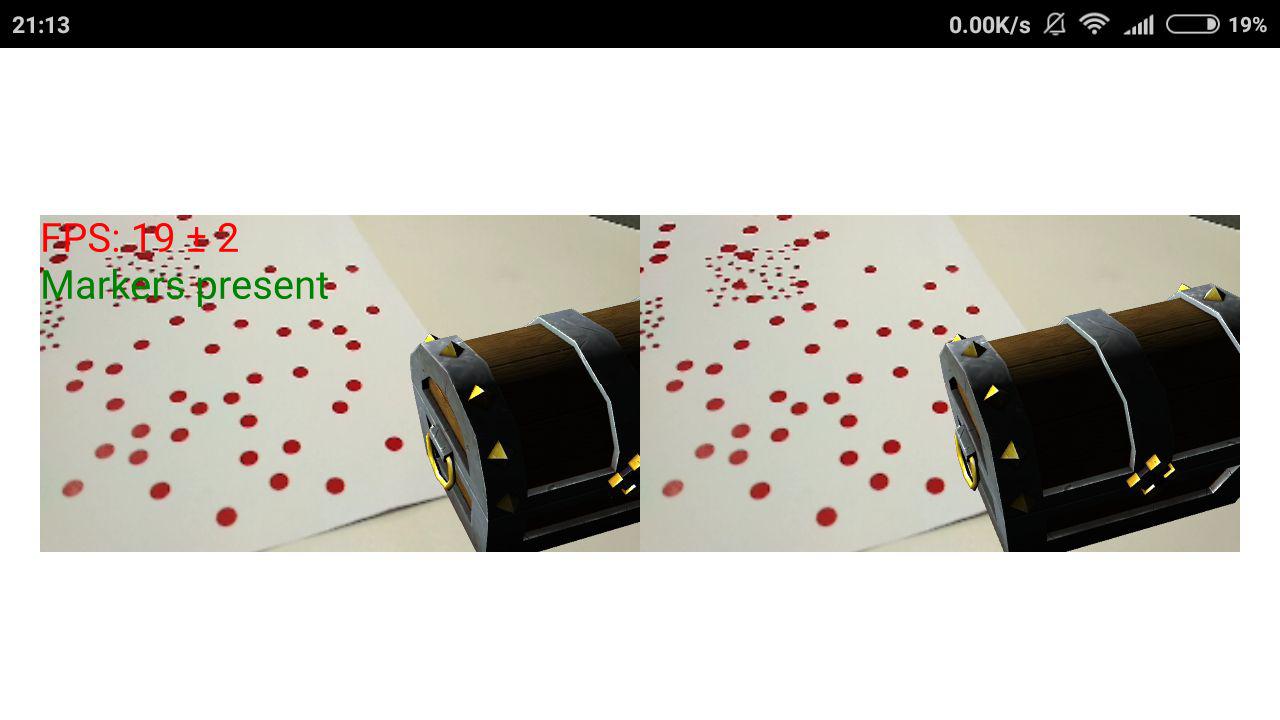 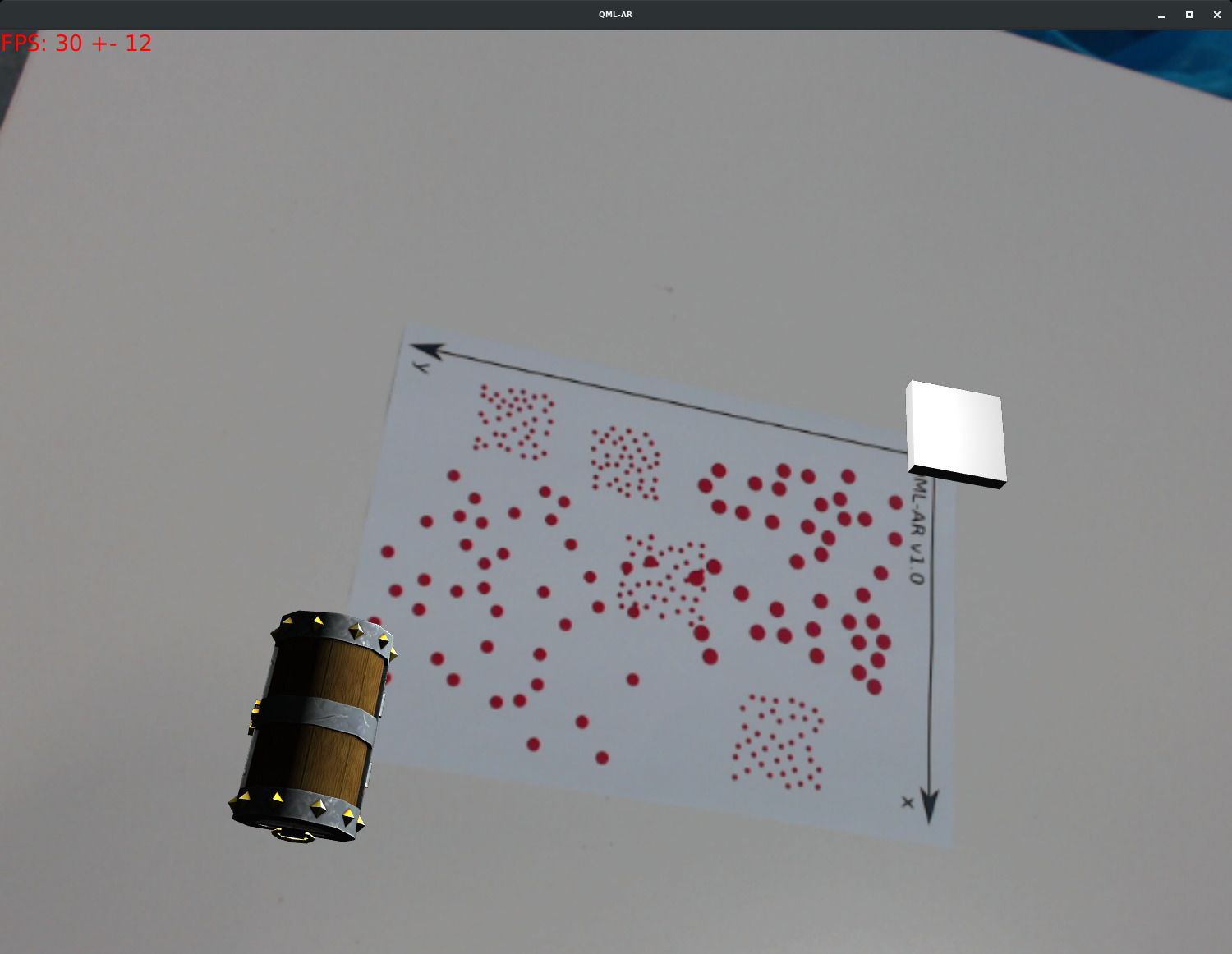 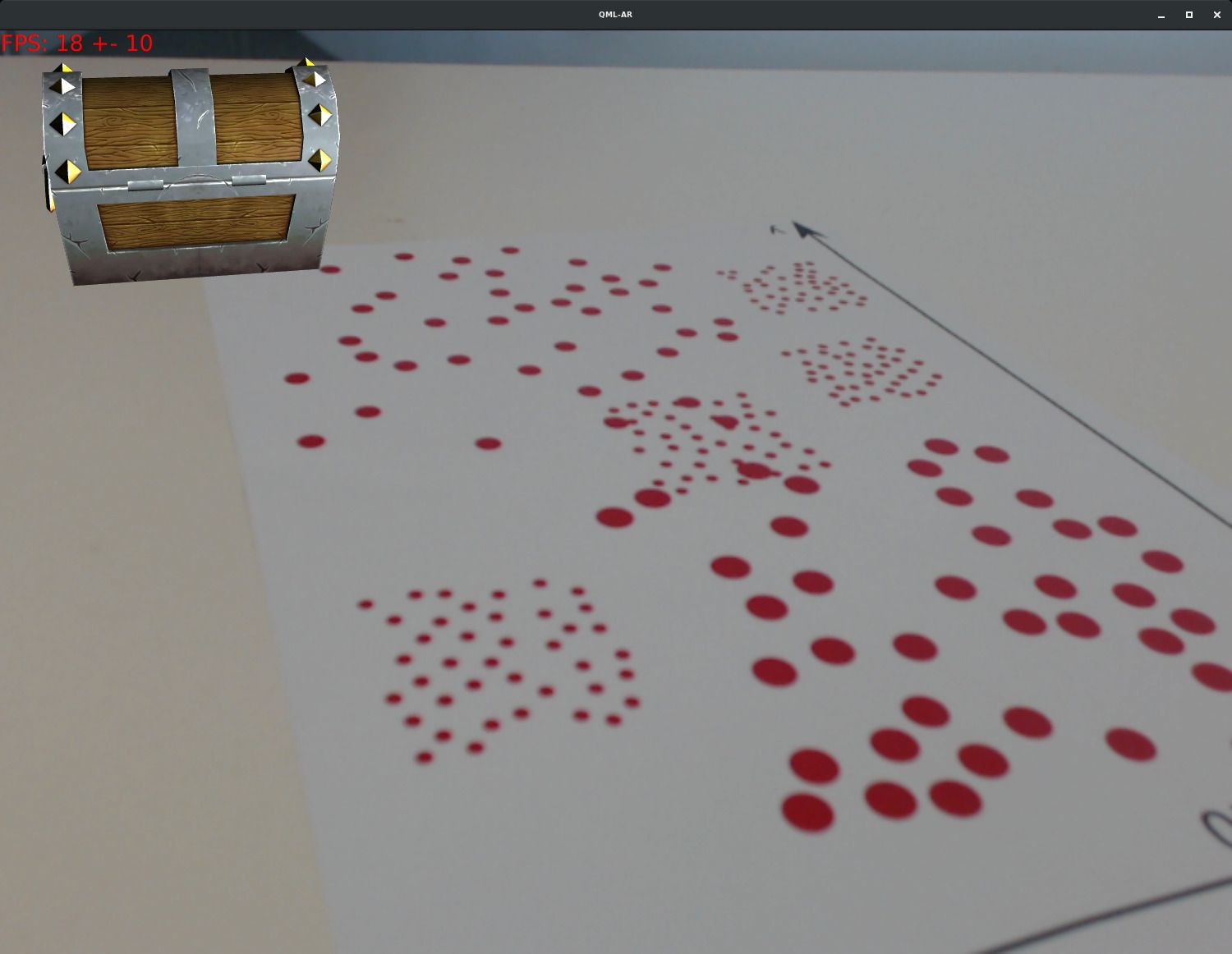 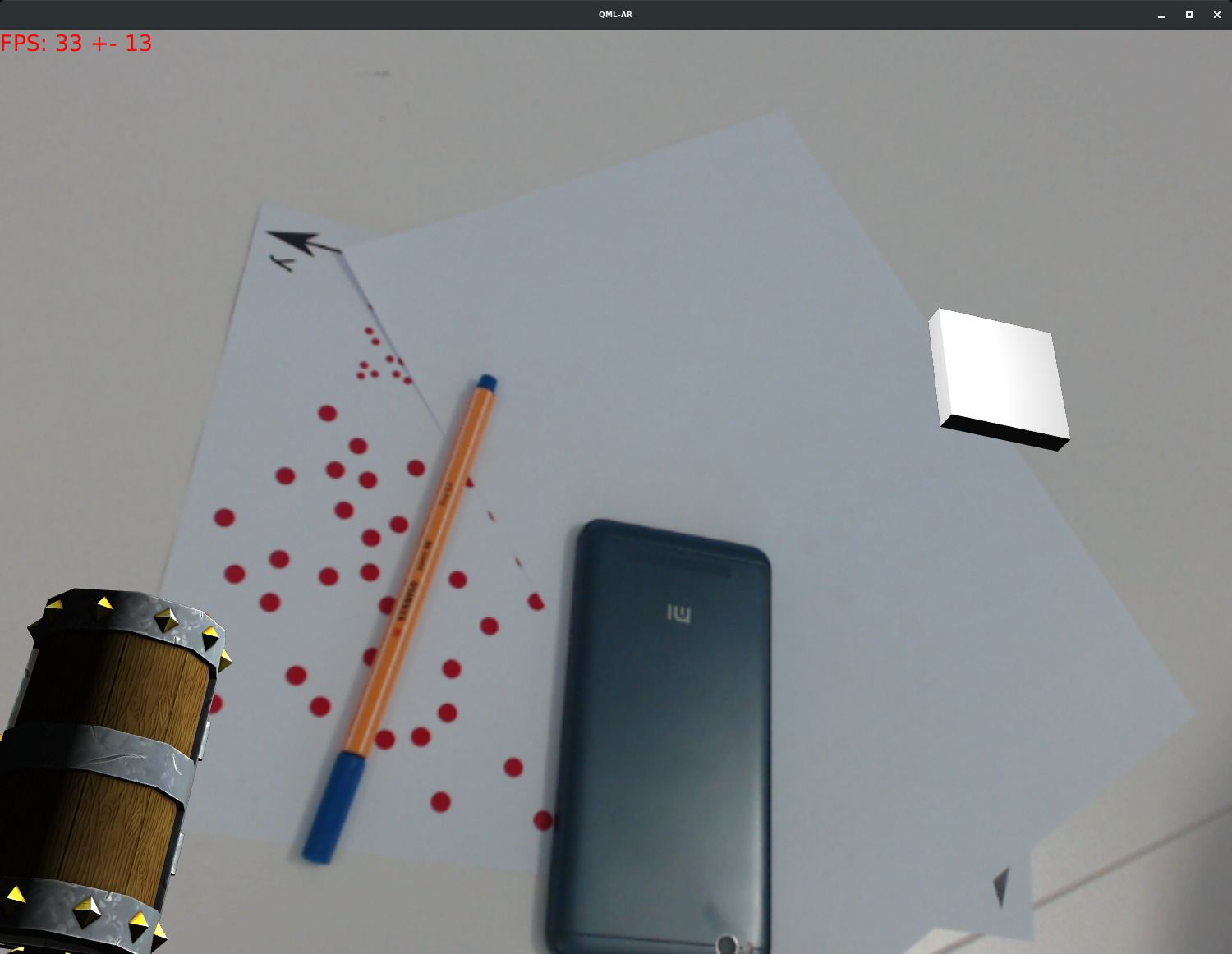 Example for Ubuntu Trusty: need to download things by hand in GUI, including Qt for Android.

Build and install the library:

The project 01_simplest is specifically designed to show how easy it is to obtain minimal functionality:

See README in the examples/ folder.

All of these are downloaded automatically using git clone --recursive:

The code documentation generated by Doxygen can be found inside the doc/ folder or online: qml-ar docs

The markers were chosen due to their relative small visual impact on the scene. The traditional black-and-white AR markers such as Chilitags, when put on the scene, distract the eye because of their high contrast (this ease of finding them is the reason they are chosen as an object for detection). The aim of this project was to find a less visually noticeable alternative to traditional markers, or seamless markers. Of all of the types of seamless markers the Random Dots project done by Hideaki Uchiyama was chosen because of the simplicity of the concept over the other markers (such as complex shapes, circles of dots, lines etc) and because of the availability of the source code for the project.

The original Uchiya library was written for Windows/GLUT and it a proof of concept. The goal of this project was to make it fully-configurable and able to run on Android mobile devices and Linux platforms. This was achieved using shaders and threads to speed up the code. Moreover, one of the features is support of Qt/QML, which is the target framework for this library. This project uses OpenCV to process images and does not use any AR-specific graphical processing library.

The application relies heavily on the Qt-specific tools, such as signals and slots, and the QtConcurrent function calls to parallelize the image processing. The whole library consists of many C++ classes which are then connected together to form a processing pipeline in the QMLAR class. This class is then wrapped inside the ThreadedQMLAR class and exported to QML. The library creates about a dozen threads. The jupyter notebook notebooks/draw_qt_graph.ipynb allows to plot a graph of the pipeline based on the source code: 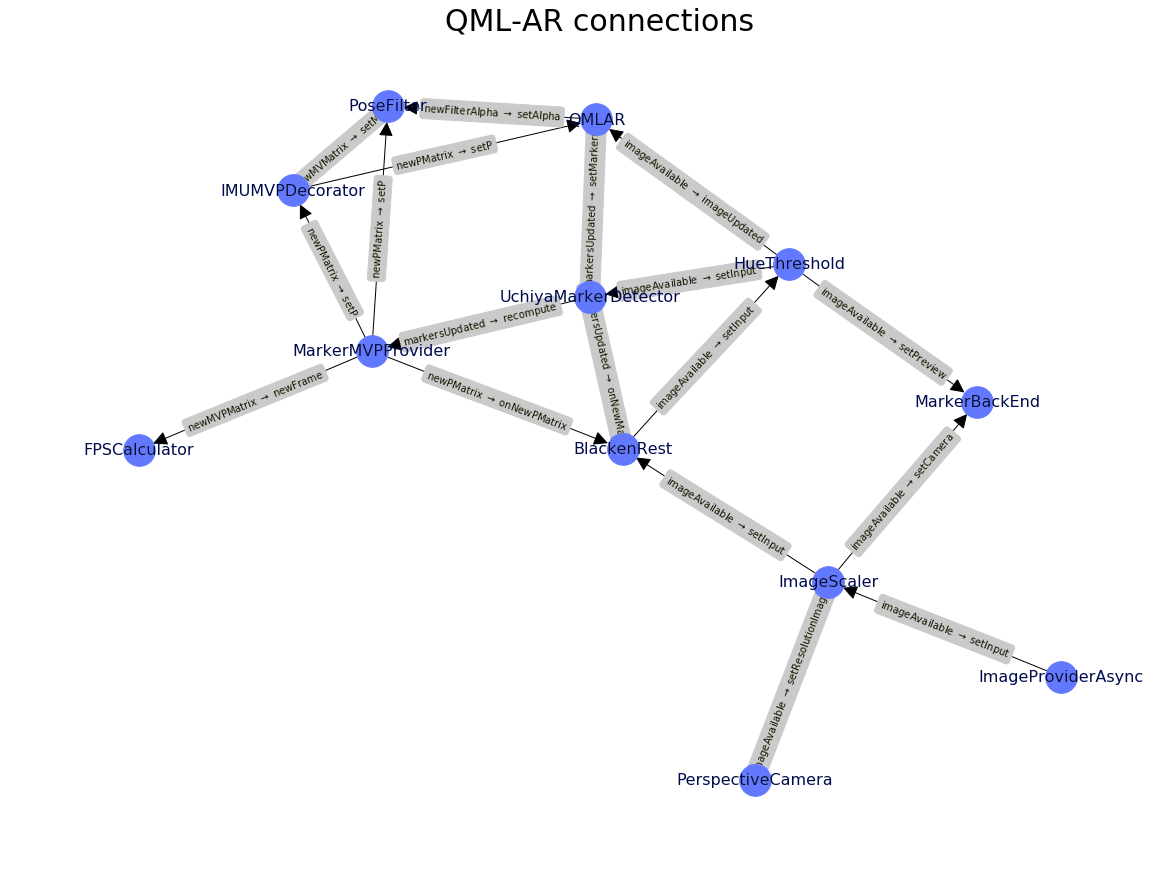 The performance of the current version is about 30FPS / 30ms latency on Linux and 25FPS / 60ms Latency on Android. The main bottlenecks on Android are the NV21⇒RGB conversion on CPU and the HSV threshold, which take together more than a half of frame processing time. To analyze performance, the corresponding defines inside the config.h file should be turned on, then the logs from the device are collected and analyzed using tools in the /performance folder. The scripts produce the output similar to this, which allows to find the component which is the bottleneck: 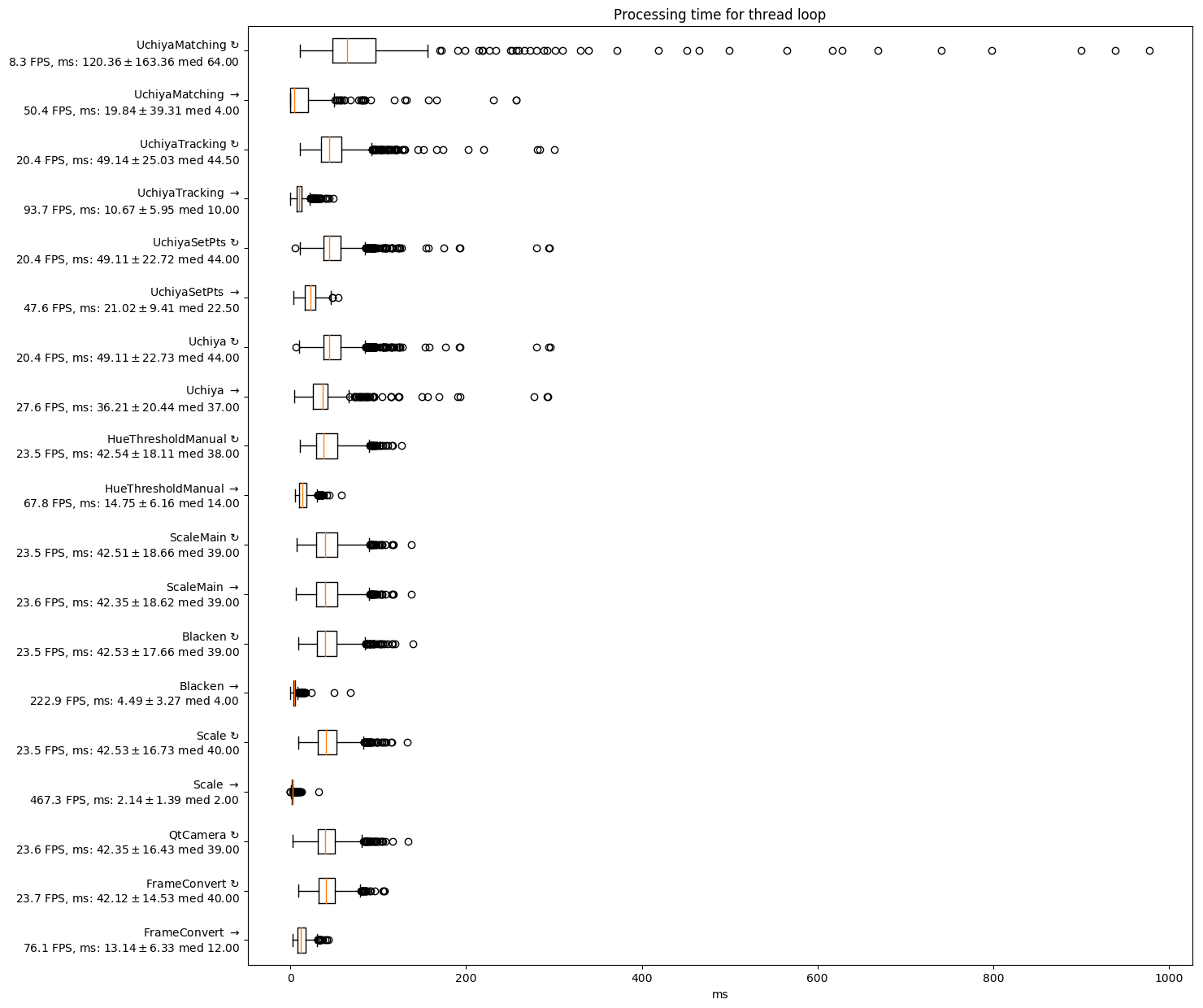 The diagram below shows the path each image takes before the pose can be inferred from that image. First, the image is grabbed from the camera using an Image Provider, which is a platform-specific class object. An OpenCVCameraBackend is used on Linux and a QtCameraBackend is used on Android. The latter needs to take the image from the GPU and is expected to be rewritten using shaders, incuding the next few steps in the pipeline. This is the last step in the pipeline which uses the GPU (and the Linux version doesn't use it at all)

After obtaining the image in the main memory, the part of it which does not contain markers is painted black using BlackenRest. The detected marker position from the previous iteration is used. At the first iteration or at the iteration right after the markers were lost, this component has no effect. This is a small heuristic which allows to speed up the process of tracking, since blobs now can be detected only on non-blackened area containing markers on the previous frame. This technique therefore requires a decent framerate.

After blackening, the image is binarized using a HueThreshold instance. The app supports dynamic calibration of the HSV values, however, at this point it is hardcoded to detect only red dots. This can be changed inside the qmlar.cpp file. Then the image is fed inside the Uchiya library which outputs the homography mapping an undistorted marker image with dots to the actual camera shot. These are used to calculate the four marker corners for each detected marker. This data is then fed inside the MarkerMVPProvider which obtains the extrinsic camera parameters (or the ModelView matrix) using a cv::solvePnP call.

The marker parameters (coordinates of dots and the location of the marker) are contained inside the /assets/markers.json file of the application, see the repository of the tool which creates markers for format description. The camera parameters are inside the /assets/camera_matrix.json with camera_matrix containing the flattened matrix components along with width and height of the image at calibration time. See /examples/00_chest/assets/camera_matrix.json in this repository for an example. Camera is calibrated using standard OpenCV tools.

On Android, there is also an additional step which makes the use of the IMU pose to correct the MVP in between camera frames to increase the frequency of updates and decrease the latency, thus making the AR view more smooth. Since the onboard phone's inertial sensors don't have enough precision for the position to be estimate (it drifts significantly even during the small time between camera frames), only the angle is corrected using the IMUMVPDecorator class. This class simply modifies the MVP by rotating it additionally by the ΔMVP estimated from the IMU, thus, increasing the perceived FPS of pose updates.

The class also tries to correct for the latency in the pipeline using the following method: time of the shot (when the photo was grabbed from the device) is remembered for each element in the pipeline. Moreover, the IMU measurements are kept for the last few second. Then, when it's time to send a new pose to QML, the class additionally rotates the pose by the difference between current IMU reading and the reading when the shot was taken. Since on Android a texture output is used for the camera image, which doesn't add any delay, along with this latency correction method it allows to decrease the perceived latency quite significantly since most of the movements the user makes are the camera rotations. Note that this method doesn't compensate neither for the translational latency nor for the latency when the object is rotated, not the camera (since no IMU readings are available in that case).

On Linux, no IMU is assumed to exist, and also the image is rendered using updates for the Image QML component, which in turn requests a QImage obtained using the OpenCV backend. This method seems quite fast on Linux despite it's inefficiency and doesn't lead to a decrease in FPS.

At the end, the application exports the MVP matrix to a QML component ARComponent, which uses it as the Camera parameter in Qt3D. This component is also capable of loading the user-defined scene. This is the main component for interaction with the library from QML.

On Android API 26 and higher (Android 8.0) a HardwareBuffer is used to quickly obtain the camera image from the GPU, converting it to HSV and thresholding while it's still on GPU, thus reducing latency by 30% down to 40ms and CPU usage by 20%. Specify android-26 or higher before running qmake if your device supports this API. Thus, on Android 26 and higher ImageScaler, BlackenRest and HueThreshold are not used because their function is provided by a faster shader- and HardwareBuffer-based NV21VideoFilterRunnable. See NV21VideoFilterRunnable, QMLAR::connectAll(), qml-ar.pri for details. The description of this functionality and discussion of possible ways to enable it on API < 26 is temporary at https://github.com/fuyufjh/GraphicBuffer/issues/7 and https://github.com/fuyufjh/GraphicBuffer/issues/5

The docs will be updated inside the doc/ folder.

Adding markers to your scene

You can add random dot markers to your svg file by using our tool: qml-ar-inkscape

Mixed reality is supported both on Android and Linux. See comments in the files of the example application on how to enable this mode. Currently, camera image rendering is done on CPU in this mode, which also results in low resolution and low FPS. Moreover, the image looks far away (whereas objects look close) since the image is not shifted. Framework tested on Xiaomi Redmi 4A, and both with Google Cardboard and Gear VR. 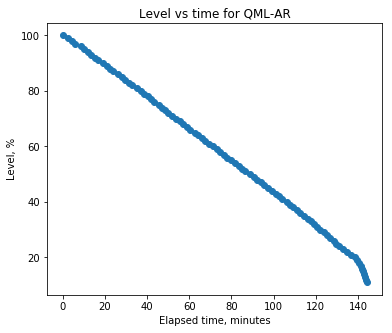 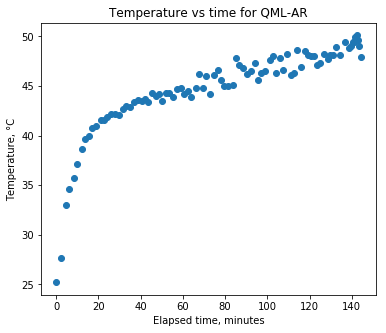 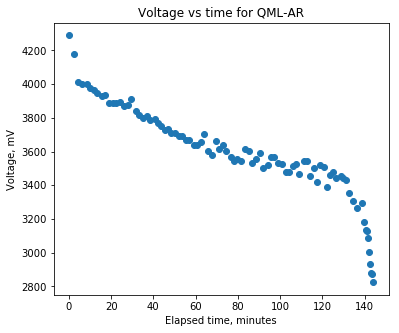 The library also is capable of estimating the position in the world for a point clicked on the screen. See the signal clickedOnActivity of the ARComponent. The program assumes that the world point is at the plane with markers (z = 0). 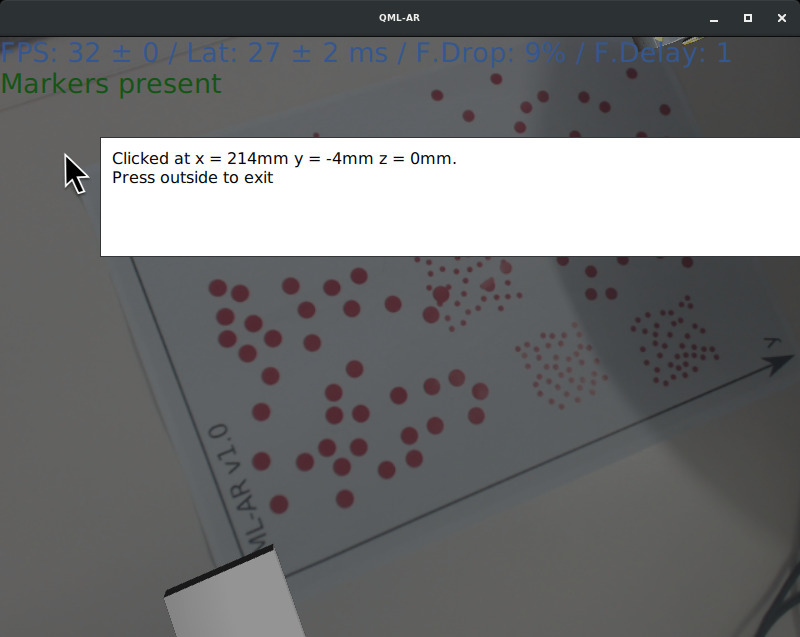 The project is also available at the qpm Qt repository as ch.epfl.chili.qmlar and can be installed using

However, this ability is not tested enough yet.